By definition, it is based on ethnicity, upbringing and shared cultural experiences, which are passed on from generation to generation. These hallmarks help to define who we are.

But identity is multi-faceted and complicated. For instance, a Chinese person can distinguish themselves even further by city (Beijing versus Shanghai versus Hong Kong). Adding to the complexity of identity is the new field of DNA testing. It has upended the very notion of identity. It is a field of science that can reveal a part of a person’s history, which may have been lost for thousands of years; and finding out about this forgotten link can reshape how a person is defined.

For example, we have seen those DNA commercials where a woman with an Irish last name, Irish grandparents on both sides, Irish cultural traditions and physicalities took a DNA test, which revealed she was more German than Irish. Through a simple kit, her long-held belief that she was 100% Irish is questioned and redefined. It raises new questions about how she views herself. Therefore, DNA is reshaping the identities of millions of people everywhere.

It is this very notion that influenced the original DNA brand and packaging. As an e-liquid, DNA takes its original identity from combustible cigarettes. It was inspired by the idea of being satisfied by placing a device between your lips to derive the immediate satisfaction of nicotine. And by design, the initial packaging and messaging of DNA mimicked the established and well-known tobacco brands. It borrowed its font type and color blocking design from tobacco. The look hoped to attract current smokers and convince them to make the switch from cigarettes to e-liquids.

But after the initial launch, the DNA team realized that its close association to cigarettes also aligned the brand to the negative impacts of smoking. Therefore, the team revisited its roots and looked deeper into its own brand DNA to redefine its unique identity in a more positive light. 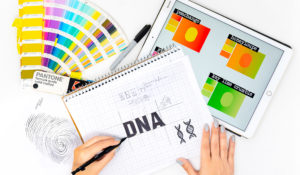 First, the team looked at the science and facts about vaping. Even though the act of smoking is directly connected to traditional cigarettes, vaping actually provides less harmful benefits to the consumer. According to a study conducted by the Public Health England, e-cigarettes are 95% less harmful than combustible cigarettes. Smoking an e-cigarette also eliminates the musty smell and more importantly, many consumers have used vapes and vaping as a way to wean themselves off nicotine and smoking completely. Therefore, the harm reduction and consumer use of vapes as a cessation device provided DNA the ability to establish a new brand vision for itself and embarked on creating a new visual identity.

Another point of distinction for DNA is its unique approach to creating its e-liquid flavors. Again, based on science, DNA took a mercurial approach to developing flavors that were completely different from the often bitter and smoky flavors of traditional cigarettes. Whereas other e-liquid brands would give you the essence of strawberries, or the cooling taste of iced lemonade, DNA provides hybrid flavor combinations which took two distinct flavors and combined them into one unique and memorable taste. Hybrid flavors include Pompaya, which mixed the slightly tart and juicy flavor profile of pomegranate and combined it to the mildly sweet and refreshing taste of papaya. In this new kind of e-liquid, each fruit leaves its distinct fingerprint on the palate of the consumer.

It’s this very idea that taste has its own identity and fingerprint that inspired the new DNA packaging. Aside from an individual’s unique DNA, fingerprints are also unique to a person, unless they are identical twins. Fingerprints represent an external stamp of individuality and identity, which is visible to the eye. Whereas DNA is identity expressed at a granular and microscopic level.

Thus, the new DNA packaging features tactile ridges and irregular undulations designed to mimic that of a fingerprint. It is designed to elicit and inspire the actual act of vaping which requires the use of hands and fingers to create that unique sensation that’s the most pleasing to the individual. The bold new colors of each box reflects the DNA of the flavor combinations which can be found inside each bottle. And the original box fonts are set against an abstract fingerprint and layered over the hand drawn lines, which wrap the entire box.

Overall, the effect of DNA is compelling and its updated design appeals to a more sophisticated consumer who desires to connect with a brand with a more mature point of view. This new visual language is a great departure from the original and establishes a new identity.